The brain in dogs, as in humans, is certainly a very fragile organ but it surprises researchers every day by its ability to “bounce back”. Yet some dogs, strongly affected by some types of brain damage, who have disabilities, can find a partial possession of their memory and brain capacities.

First, we must distinguish between minor damages such as concussions and more serious damages in the dog’s brain. In the first case, the canine relies very well and has no after-effects. Which is not the case for a dog more affected by brain’s damage.

What is brain injury in dogs? 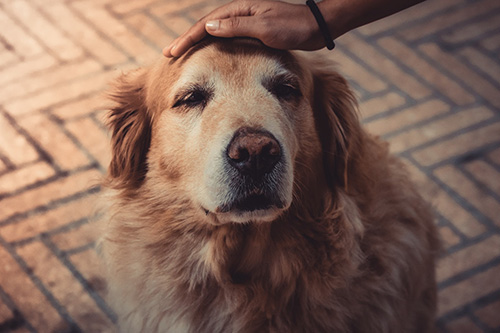 Brain injury in dogs can be defined as a brain damage regardless of the age at which it occurs. Dog’s brain injury can cause many forms of cognitive deterioration such as attention problems and memory problems in dogs.

A pet who suffers from a brain damage may also have any type of vascular lesions, but only if the lesion in dog was not created directly by an external factor. This type of damage is different from a traumatic brain injury. Indeed, this lesion is caused by an external force that damages the dog’s brain in a traumatic way.

Traumatic brain injury, also known as intracranial injury, is classified according to its severity, the origin of the lesion (internal or external) or other characteristics such as the location of brain damage in the dog. When we refer to an injury to the dog’s brain, we usually talk about traumatic brain damage of course.

Symptoms and Consequences of a dog’ brain injury

Here we present the most common consequences of brain damage in dogs. A brain damage can completely disrupt the dog’s life. This truth is dramatic, both for affected dogs and their masters. Nothing is more like before, because the canine’s brain is not working as usual:

Some consequences are visible, but the brain lesion in dogs also causes many invisible disabilities. The brain is complex, and the consequences of brain damage are too. They are varied, differ from one dog to another, and depend on the severity and the type of lesion in your dog.

The most common causes of brain damage in dogs

Traumatic brain injury is one of the leading causes of disability and cognitive deterioration, especially in puppies. The causes and symptoms are multiple and depend on the type of damage. Causes include falls, road accidents or shock to the dog’s skull. Many brain damages can have a significant impact on cognition and abilities.

Head trauma: it is produced by an intense blow on the skull of the dog. This type of brain shock can lead to impaired consciousness and can cause a skull fracture.

Ictus or cerebrovascular accident: They are caused by problems of irrigation of the dog’s brain like the obstruction of the arteries.

Cerebral hypoxia: Brain damage due to a lack of oxygen in the dog’s brain, most commonly caused by cardiac arrest in this animal.

Tumors: Brain tumors in dog’s brain may be caused in the beginning by a partial damage that makes it difficult to control after to be more and more serious. The soft tissue mass grows in the dog’s brain and can evolve in a serious way.

Encephalitis: This infection affects the brain and more precisely the temporal and frontal lobes in dogs. Brain damage caused by encephalitis causes can produce emotional and cognitive changes as well as dog’s behavior troubles.

Can a dog recover from brain damage?

Damaged or lost neurons in dogs can be permanently destroyed, but the connections between nerve cells can improve and connect to other parts of the brain to try to recover itself. This is called brain plasticity. 15% of partial brain damage in dogs can be cured and survive without any surgical intervention.

Regular training can help maintain or improve knowledge and cognitive skills affected by brain injury or traumatic brain damage. A dog can survive especially after a partial brain injury .Rehabilitation of the brain injury can take a long time and requires a lot of exercises or treatments that must be done by an accredited and specialized doctor.

New Hope for Brain Injury or damage in dogs: Researchers at a Japanese University have found that hyperbaric oxygen therapy helps to recover cognitive abilities such as memory and concentration in dogs, even years after onset cranial trauma. But it was not developed, because there was no appropriate technological equipment to perform accurate diagnosis of brain lesions in humans and dogs as well.