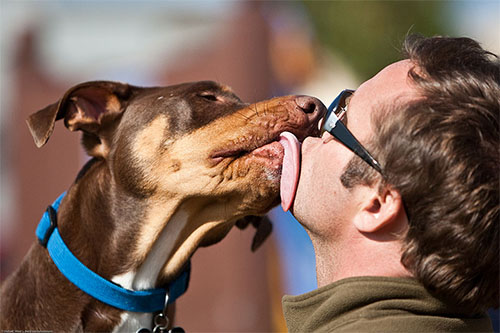 When a dog licks your face, it is the means through which he shows his affection or submission to you. However, this behavior can become annoying in certain situations and correcting it becomes necessary. How to get there?

We all know that dogs tend to lick our face to show us their affection. These licks are, in a way, the canine version of our kisses. A behavior that therefore starts from a very good intention on the part of dogs, but that many of us may not appreciate for justified reasons, in particular those relating to hygiene.

Face licking also proves troublesome when it concerns guests and visitors. It is therefore necessary first of all to understand the origins and motivations of this canine behavior, then to opt for the right attitude to have towards your dog when he starts it in order to put an end to it.

A reflex acquired from the youngest age of the puppy

The action of licking another individual is part of the panoply of gestures acquired at birth by the puppy. The latter learns it very early from its mother, who cleans it by licking it and does the same with the other babies of the litter. Also, the female dog licks her offspring to show her affection.

Later, the puppies instinctively begin to lick their mother’s lips to make her understand that they are hungry.

For dogs, licking is not just a cleaning action. When it is intended for others, it becomes a means of communication and social interaction. It allows, among other things, to signify to his “interlocutor” that we have good intentions towards him.

Licking can thus be a sign of hierarchical submission to a fellow creature. This is therefore a manifestation of appeasement aimed at preventing any form of tension by accepting a lower hierarchical rank. It often occurs during the first meeting between 2 dogs.

If the 2 dogs already know and appreciate each other, licking can, on the other hand, be interpreted as an emotional act. In the same way, moreover, that the dog does it with the humans he appreciates among his entourage.

It can also be a kind of attempt to help when he feels his master is not well. Dogs sense our emotions and are particularly sensitive to our states of stress, for example. When this is the case, they start licking us to reassure us, to comfort us.

In puppies, licking towards his master is also the means by which he seeks to claim attention from him.

To summarize, dogs lick their congeners or humans for various reasons. They all start with friendly intentions, but it sometimes becomes necessary to stop this behavior so as not to cause discomfort. Licking very often appears when the master returns home, the dog being very excited to find him and showing him his love by licking his face. You can take advantage of this precise moment to carry out the following exercise, intended to correct this “flaw”.

The attitude to have with the dog to correct this behavior

As soon as you arrive home, keep in mind that only your return is a great source of joy for your dog. So you don’t need to excite him further by acting excessively, even if the temptation is great to hug him.

You can respond to him with words, but not yet with physical contact. Give him time to calm down first. To do this, go through your usual homecoming ritual (hang up your clothes, put your things down, etc.), then order your dog to stay seated. As soon as he does, praise him warmly, but calmly. Caress him just as calmly, but stop as soon as he tries to lick your face. Get back up immediately and ask him to sit down again. Repeat as many times as necessary.

Over time, the dog will gradually understand that he should no longer lick your face if he wants to be praised and petted.