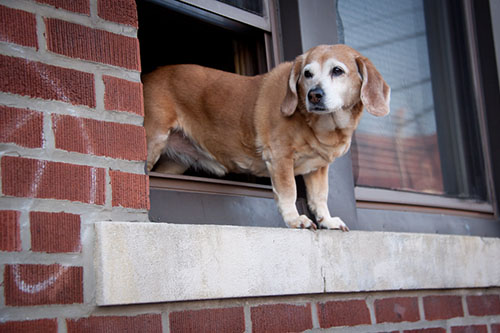 Your dog cries and howls as soon as you leave him alone at home? He peeps behind the bathroom door when you’re there? Your dog follows you everywhere or he can’t stand seeing you in a different room. It even destroys your stuff. It becomes unbearable.

When a puppy is taken from its siblings, it is a real devastation for him. It is even a real trauma, often amplified by this received idea which is to leave your puppy alone from the first night. I would even say that most masters do not imagine how necessary this learning is.

In reality, the puppy will learn nothing except to resign. As with any trauma, this one can change as you grow. This is how a two-month-old puppy resigned to being left alone for the first few days at your home, can start to howl and do damage a few months later. And that’s normal, because he will not have really learned to be alone.

In a group of dogs, learning to be alone does not happen overnight, but rather very gradually. If we left the choice to the group, the puppies would not be put away or not for several months. This explains why many dogs do not cope well with loneliness. In short, learning to be alone is difficult for the dog, because naturally he would not stay alone and especially not overnight.

Effects on the dog

Indeed, loneliness in dogs is experienced as stress, if it is not taught that precisely this can be pleasant. Stress will manifest itself in different ways, depending on the dog, its history and its environment. But there are still clues that show you clearly that your dog can not be left alone. In addition your dog can:

As in humans, chronic stress is dangerous for health. It should therefore be taken into account as soon as possible. The more you delay learning solitude, the more difficult it will be for the dog and for you.

When to teach him to be alone?

The ideal would be to learn solitude as early as possible. But very often, when the puppy arrives at home, he has never been alone before. Let’s not forget that until now he was always surrounded by his siblings and his mother. He must therefore be able to reassure himself in his new environment and be comfortable there before any learning. It may take a few days. Learning will come once your puppy feels more comfortable in your home.

Some puppies are very happy from day one. Do not be distracted by this attitude. Your puppy may be experiencing stress and not show it. So you have to be patient.

What not to do

When a dog does not know how to stay alone and he does damage (destruction of objects, dirtiness, barking, howling), the master is often very angry when he returns home and discovers what the dog has do. Misunderstood, the dog is then punished. This is what absolutely must not be done. Indeed, your dog does not know why he is being punished. His look of “guilty” is just a signal to appease you, because he made the connection between your arrival and the punishment. He may even have made the connection between: there are objects on the floor and the master who is angry.

Your dog doesn’t see punishment the way you do. He will therefore not only stress for your departure, but also for your return. Which will end up sinking him into the mismanagement of his loneliness. It is therefore likely to do more damage.

How to teach him to be alone?

Here are some steps that will help your dog stay alone. These steps can be put in place when he is a puppy, but also when the dog is an adult:

According to the dogs, this learning will be more or less long. So you have to be patient. You can help your dog by giving him Bach flowers or even by hiring a pet-sitter who would come and take him out during your absences.