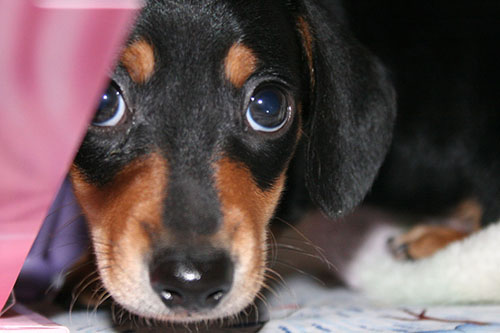 When you think about it, deep within each of us hides one or more fears. Fear of the dark, fear of snakes, mice, spiders! Ha! Those spiders, don’t even talk to me about them! I am one of those who have climbed on a counter at the mere sight of a harmless little spider on the bathroom floor! If we humans experience fear, so can animals.

Indeed, our four-legged friends are also afraid of certain things. When taking a walk with your dog, have you ever seen him have a funny reaction to Halloween decorations, for example? Or Grandpa’s dog who has never seen a child who will hide behind an armchair at the mere sight of a baby? These reactions can be the manifestation of an emotion such as fear.

How do I identify fear in my dog?

An emotion such as fear will necessarily cause physical manifestations. These include stiffness in the neck, head, tail and all limbs. We will also notice that the dog will be leaning backwards, as if ready to flee, in low postures, ears back, tail under his body. He might also shake, salivate, lick his lips, run away and/or hide, he might, in extreme cases, urinate, defecate and empty his anal glands. There may also appear small white films in his coat, dander, and his coat may look wet. If these signs all seem to correlate with the intensity of social or physical stimuli, then we are talking about a fear. It could be worked in classical counter-conditioning and in desensitization. If your dog, when there is a thunderstorm or a loud noise, exhibits these types of reactions, but recovers quickly, the methods suggested above will work well.

Can my dog be less afraid?

Indeed, “classical counter-conditioning is classical conditioning of a new psychobiological element in the same contexts that activated a prior psychobiological response. » Uh what? I can already hear you telling me that I am talking to you in Chinese! I grant you, it looks very complicated at first glance, but in reality it is very simple. If, for example, your dog is afraid of thunderstorms, we will offer him something pleasant when such bad weather presents itself. We’re going to get him his favorite toy! We’ll give him a meaty bone to chew on! In addition to giving him a positive emotion, chewing will allow his brain to release endorphins! Yippee! One thing leading to another, the fact of arousing a positive emotion such as joy each time a storm arises, your pooch will feel less and less fear in a context that aroused it before!

what to do if my dog is scared?

Whatever the origin of the fear, it is not advisable to try to reassure the dog too much and try to “cajole” him at all costs. This often only increases his fear! Nor punish him, even if he does a “dumb thing”…

We must not forget that some dogs also strongly feel the stress of their master, and that it is therefore necessary to make sure not to communicate our own anxieties to him.

In case of fear, it is advisable to close the windows, let the dog take refuge where he wants, so that he feels safe while waiting for the traumatic event to pass.

When a dog is scared for whatever reason, he becomes deaf to everything! He’s freaking out, and he’s not “reasonable.” No need to scold him, give him orders, or even talk to him to reassure him, because he will often hear nothing.

In case of fear in a dog, try to put him in a more comfortable place, where he will feel that he is less in danger: quiet or in the dark, for example, and give him time to calm. Better to leave it free to be able to deviate from the stimulus. If he is stuck (because he is on a leash, for example) the impossibility of fleeing would increase the intensity of his fear. You must also avoid running away at all costs, because a frightened dog may not respond to your return calls. There may then be danger to his life in the event of a leak.

If your dog is very anxious, and the behavioral therapies are ineffective or the phobias are numerous, it will be necessary to help him to suffer less and to participate better with the help of therapies and / or soothing or anxiolytic products. Do not hesitate to ask your veterinarian for advice. The dog’s animal health insurance can help fund these treatments.