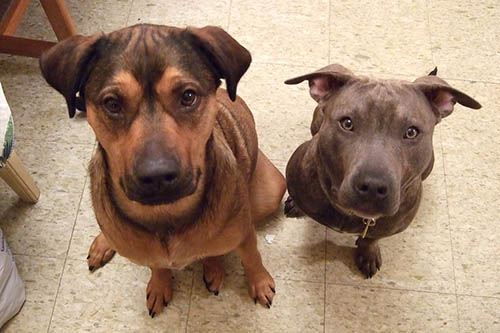 A solid foundation of positive parenting allows you to get off to a good start, whether it’s with your new puppy or your older dog. But education should be more than just a basic, especially if unwanted canine behaviors arise.

If you’re looking for help dealing with your dog’s behavior problem, or if you’re just curious about why your dog is doing what he’s doing, you’ve come to the right place.

Learn about common dog behavior problems here to help you and your pup address some of the behaviors and habits of our canine friends. Understanding common explanations for behavior problems is the first step to solving and preventing these problems.

Dogs really like to dig. You will have to train Fido to stop him. When you catch him in the act, say “no”. Then distract him with a toy. There’s no point scolding him after he’s finished. You need to be consistent while he digs, not after. Tip: Give them a sandbox where they can let off steam. Bury their favorite toys and watch them have fun bringing them out. Multiply the compliments: they will learn that they can dig all day in this place.

Dogs, especially puppies, explore the world with their mouths. They like to chew because it calms them down. But they destroy your stuff. Even worse: they may eat something like a sock that could block their intestines. Break this habit now. Give him chew toys and remove things he shouldn’t chew on. If you catch him chewing something he shouldn’t, say “no”, replace the object with an approved toy and praise him once he has chewed it

There’s a surefire way to avoid this: Never give your dog food from the table. If he doesn’t get leftovers, he won’t learn to beg. You can take him out of the room while you eat or put him in his crate. You can also teach him to go to a special place and wait for it to pass.

Does not come when called

Always praise your dog when he comes to you, whether you called him or not. This teaches him that coming to you is a good thing. Say “come” or “here”. He may not understand what you want if you just call him by his name. If he doesn’t come, don’t chase him. Call him again while you walk away. This might encourage them to follow you. If they still don’t come, tell them to sit down and go get them.

pulling on the leash

Help your dog learn to walk calmly by your side. Never let him shoot, otherwise he will learn that it can pay off. Keep the leash short but loose. Stop when you feel her tense up. He will stop to see why you are not moving. When he returns, reward him and keep walking. After a few days, he will understand that shooting gets him nowhere.

If your dog gets angry when you leave, teach him that you will always come back. At first, leave it alone for only 5 or 10 minutes. Walk away a little longer each time. Give him a chew toy and leave the radio or television on. Stay calm when you leave and return so he knows it’s okay to be alone. Crate training can prevent this problem in some dogs. But that may not work with an anxious older dog. Ask your veterinarian for advice.

Does your dog whine? If you pet him, stare at him, or do anything but ignore him, you’re teaching him that moaning works. To end it, turn your back on him when he whines, cross your arms and look away, or leave the room. Pet him and play with him when he’s not whining.

barking at the door

To reduce barking, teach your dog a new habit. Choose a location within sight of the door. Next, teach him to lie down and stay when you tell him, “Go instead.” This will help keep him calm and give him something to do while waiting to be greeted. Ask a friend to come to the door with a treat, but only open the door when your dog is calm. Do this often enough and he will learn to calm down if he wants his treat.

It is natural for a dog to greet people while jumping. But it can scare away guests. Turn away if your dog jumps on you. Don’t pay attention to your dog if his front paws aren’t touching the ground. You can then greet him and pet him. Or tell him to sit and wait for him to do so before petting him. Try to keep your greetings discreet. This will help your dog learn to control his own excitement. Make sure he doesn’t bother or frighten people who aren’t used to him.

A hostile dog is usually a dog that is scared or nervous. Work with a professional trainer to teach your dog to trust you in a healthy way. Never leave an aggressive dog alone with unfamiliar children or adults, even if you think he won’t hurt anyone. You may need to muzzle him in public.