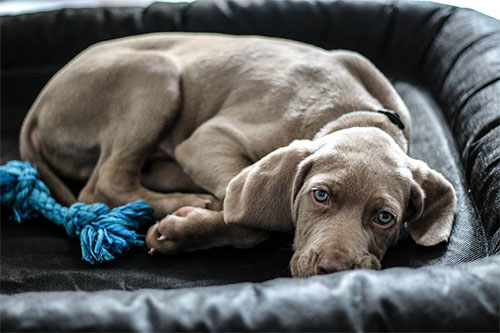 Sleep in dogs is much more complex than we think and understanding it well will help avoid behavior problems. Did you know that humans are the only animal to voluntarily lack sleep? However, this is a non-negotiable biological need since it literally supports our existence.

It is therefore an interesting fact that distinguishes humans since no other animal modifies its sleep cycle as we do. Although this decision is unique to you, you have to wonder if it also affects the animals in the house, especially the dog who is a social animal and who often tries to follow your rhythm.

Understanding the animal species you live with is the basis of a beautiful relationship. Unfortunately, there are still very few scientific studies on sleep habits in dogs. However, it is important to be interested in it, because sleep disorders can cause health and behavior problems.

Obviously, the needs differ depending on the dog’s lifestyle, age, health status and genetics, but it can be said that in general, an adult companion dog should sleep between 10 and 15 hours a day. We add to this that a puppy should sleep 16 to 20 hours a day. We are talking here about a deep sleep and not dozing on the corner of a couch with one eye watching the postman and passers-by.

Have you ever paid attention to how many hours your dog sleeps daily? You might be surprised to find that it doesn’t hit those numbers. Indeed, several elements of our daily life keep our companions awake, which causes, in the long run, certain problematic behaviors and health problems.

In this article, we will discuss some of the sleep disorders, the possible behavioral problems related to its lack, the common causes of a lack of sleep and we will give you simple and effective strategies to get that pup to be more often. in Morpheus arms.

As mentioned earlier, sleep is an essential need for good health. This is a complex process comprising different stages, each with specific functions. The dog has a polyphasic sleep type, that is to say that it is split into several periods distributed throughout the day. In comparison, humans have monophasic sleep, which means that they take most of their sleeping hours in a single period.

A standard sleep cycle is about two hours long. This is divided into different phases that we present to you here.

Why is it so important to sleep?

There are many reasons why sleep is an essential need. Of course, the needs may vary according to the stages of life or the state of health of your companion. The puppy needs a very large number of hours of sleep every day. So don’t be surprised if your 8 week old puppy sleeps almost all the time. In an older dog, the hours of sleep are also greater than in a young adult. However, the latter may be more prone to sleep disorders that do not allow him to rest completely (joint pain, confusion, incontinence, etc.).

Also, in winter, several aspects such as cold, snow, ice and less sunshine generally cause the dog to sleep longer than during other seasons of the year.

The benefits of good sleep are definitely numerous on the body and moods. In particular, sleep regulates and repairs the body by eliminating toxins and other substances in addition to consolidating nerve connections. It strengthens the immune system, balances serotonin levels and reduces cortisol levels (hormone associated with stress). In addition to taking care of the psychological and hormonal balance, the brain also enters into the process of memorizing learning, information and events to which the dog will have been exposed during the day.

What can cause lack of sleep (hyposomnia)

The REM sleep phase is the most easily identifiable. It is during this phase that the dog seems agitated, because he is in the middle of a dream. So this is where we place a warning: do not wake a dog who is restless in his sleep.

Although the popular tendency is to want to wake up the dog who seems in little distress due to a nightmare for example, and this, based on good intentions, if we wake him up at this time, he could behave unexpectedly. A sudden awakening can cause confusion and some may respond with aggression, known as “sleep aggression” in canine behavior.

During these attacks, the dog often reacts by biting what touched him without even realizing it. However, we are aware that sometimes it is accidental to wake him up and these accidents are not common. It is for this reason that it is important to pay attention to the dog’s favorite sleeping places. In this way, it will be possible to prevent and avoid these unfortunate incidents.

In conclusion, it is important to ensure that your dog has an optimal environment to promote his sleep and that he has the most stable schedule possible.

Sleep is a non-negotiable biological need. It is the system that sustains the existence of all living beings. If despite all your efforts you notice that your dog still seems to have a sleep disorder, there could be an underlying health problem and in this case, do not hesitate to contact your veterinarian.