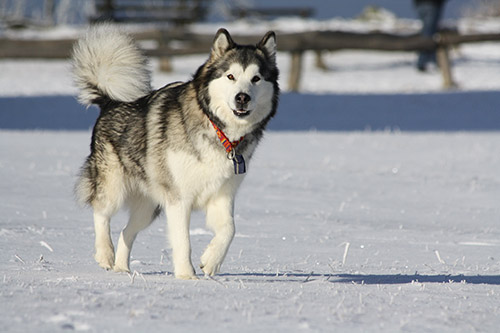 If you decide to acquire a dog likely to be dangerous, we advise you to respect the basic rules of education of the puppy.

First you have to choose your breeding correctly, a puppy must grow up in a stimulating environment. If possible, choose a breeding that resembles the household in which he will grow. If, for example, you have a family with children and a cat, look for breeders who have children and a cat. If this is not the case, don’t worry, you can get your dog used to adoption.

The Alaskan Malamute has iron health. It supports winter conditions wonderfully but has more difficulty with hot weather. Its maintenance is minimal and educating it is quite easy. In addition, this canine is an adorable life companion. He is also not very sociable with other dogs.

The Alaskan Malamute is typically an arctic sled dog. He is built for activity, strength and endurance: strong bones, well-developed musculature, much more than that of the Siberian Husky with which he is often confused. His high and proud head carriage enhances his natural elegance. He also does not hesitate to tackle and bite when he feels in danger or threatened by others.

Dobermans typically possess black or brown colored coats dotted with fiery color. These colors inspire fear in many people who mistakenly believe that it can be a dangerous animal.

But in reality, they are not violent when you respect them. It is true that they are nervous dogs who can get irritated quickly. Likewise, they are wary of strangers and may bark when in the presence of an unfamiliar person. 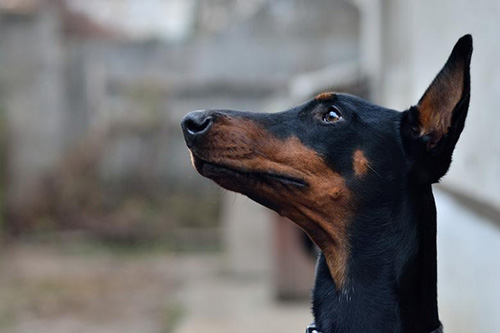 It is therefore necessary to socialize the Doberman from his age so that he becomes less hostile to strangers. This will allow him to be friendly with everyone. He will only show signs of aggression when he feels threatened or in danger.

If you have to travel or be away for a long time, we recommend having it looked after by someone to whom it seems accustomed. This will make him feel safe. However, this breed of dog is not suitable for the new master or novices.

The Tibetan Mastiff has a strong character: it is a resolute dog, fearless and can be unpredictable. Quite independent, he is very attached to his masters (and to his territory), even if he shows little affection.

He is very protective and an excellent guardian, he is very wary of strangers and can go so far as to bite if necessary. 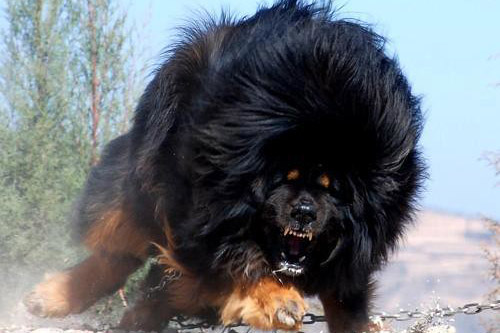 Normally, its imposing appearance and its powerful barking are already largely dissuasive! With him, you feel really safe. The presence of children near him is not desirable. He has, in fact, a little patient character and does not like to be solicited.

Commonly called Amstaff, the American Staffordshire Terrier can weigh more than 40 kilos. It needs a specific diet to thrive. A dog kibble comparison allows you to find the foods that suit him on a daily basis. Originally used as a fighting dog, this breed is potentially dangerous due to its aggressive instincts. 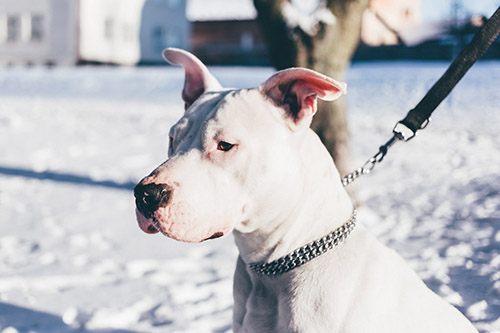 Even though its domestication has softened its temperament over time, the Amstaff remains an attack dog. It is therefore essential to educate and socialize it from an early age.

Appearing at the end of the 18th century, the Pitbull was immediately used to fight bulls and dogs in the arenas and then entertain the public of the time. This is where he got his reputation as an aggressive and ferocious hound, a killer dog attracted by the smell of blood. 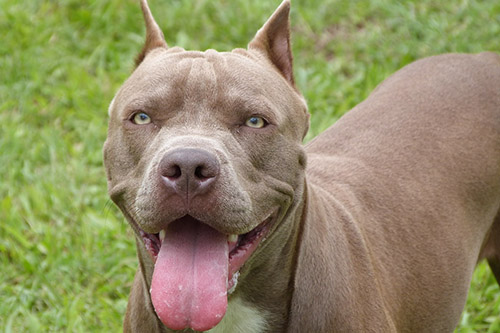 The Pitbull is not genetically disposed to be aggressive. On the contrary, he is a very cuddly and very affectionate animal who is also more obedient, attentive and very intelligent compared to other dogs. You just have to give him the essentials: attention, a good education and above all, plenty of space so that he can exercise himself. Be careful, as he does not know his strength, it is not recommended to leave him with young children without supervision.

The imposing physique of the Malinois is also accompanied by an unfailing courage. As a good sheepdog accustomed to watching over a herd, he will never hesitate to put himself in danger to accomplish a task. He is a formidable working dog, much appreciated by public security bodies because of his great abilities. 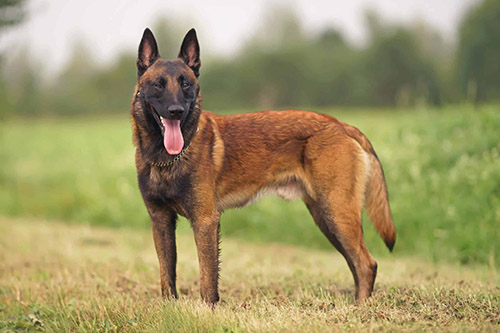 Like all sheepdogs, the Malinois is a very intelligent dog, which quickly understands what is expected of it, provided that you never show violence with it. However, his education should not be neglected. You have to be firm with him, but never violent to avoid pointing the dog and making it aggressive. He must be socialized with your other pets and family, so that it does not become dangerous or aggressive.

It is believed that the Pointer originally originated in Portugal and is the descendant of Braques. But it was English breeders who developed this breed from the 18th century, as we know it today. Powerful, the English Pointer is also a particularly agile dog. Its endurance, its speed and its exceptional olfactory qualities make it an excellent hunting dog for game birds. 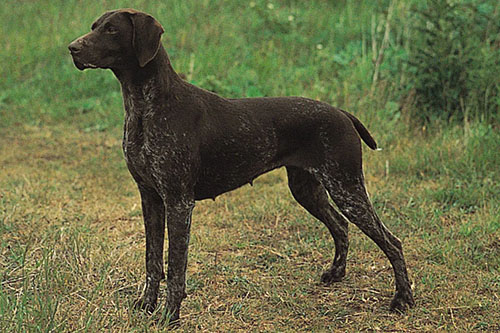 The behavior of this dog is the responsibility of his master, who must teach him what is expected of him and how he should behave in the presence of other animals and people. He is sometimes aggressive and dangerous, but his education can often be the main cause.

Indeed, a Rottweiler has a square head and a size between 55 cm and 68 cm. It generally weighs between 42 and 50 kg and its hair is of medium length. Giant in size and black and tan in color, it has a life expectancy of 12 years and its gestation period varies from 60 to 63 days. 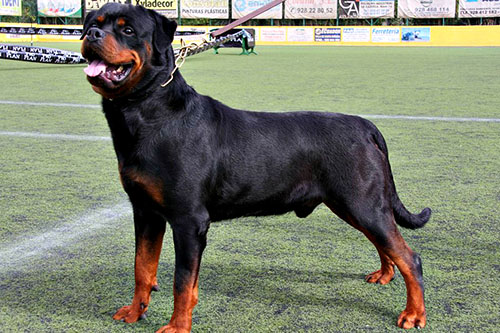 The Rottweiler, said dangerous dog or naughty dog, has a strong notoriety in terms of wickedness. It is to be known that it is certainly a pet that is at the same time faithful, loyal, tender and affectionate. Known as a guard dog, he is very dissuasive by his look.

When we talk about the Beauceron, we are dealing with a very courageous, faithful and confident dog. In addition, he is very intelligent and he is able to learn a very wide variety of commands and tricks. Attention ! in his upbringing, you should never resort to physical punishment because you will end up ruining your relationship. 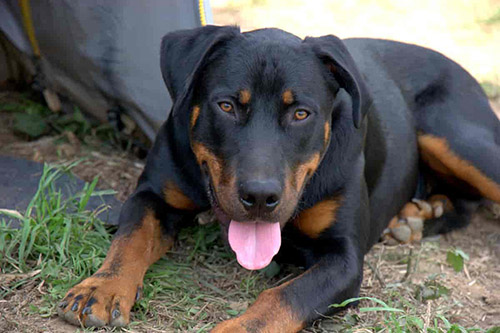 The Beauceron is the largest of the dogs in the first group (a group which currently includes all the sheepdogs). By his size, his power, his expression, he appears as the formidable defender of his masters, his herd, his property. His dark gaze is frank, loyal, stern, even harsh, which may have earned him a reputation as an aggressive dog in certain regions. 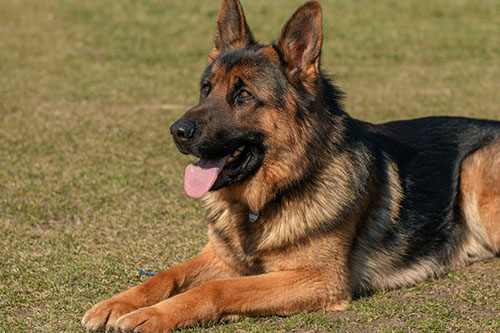 When dealing with dogs as large and powerful as the German Shepherd, there are a few things to be aware of. It needs a lot of care and attention. Keep reading to find out if their reputation as aggressive dogs is accurate.