All pet owners like to believe it: our dear little four-legged friend thinks, is capable of interaction and even thinks! It is tempting to project our way of perceiving the world on our pets. But what does science say? Is a smart dog rare?

In the 1970s, an American student Irene Pepperberg achieved impressive results with her parrot Alex: he learned to count, and most importantly, the young woman managed to establish a real dialogue with his parrot who knew a hundred words in English. She was able to ask him questions like, “What color is this fruit? And get an answer! 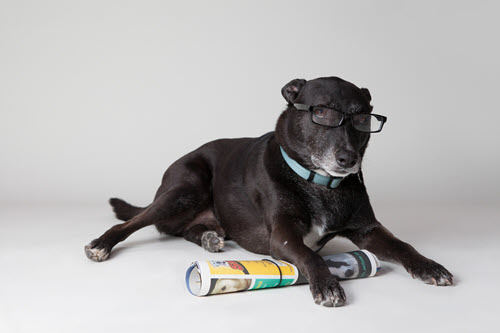 Today, we propose to test the intelligence of your dog! Easy to make and safe for the well-being of your companions, here are five small dog games to try.

Go to a garden or a park and stand behind a fence or fence at least a dozen meters long and from which you can see through. Throw a toy to your dog to distract him and get around the fence. The barrier now separates you from your dog. Call him.

If he can immediately understand that he has to go around the obstacle to join you, he’s a real genius!

Test 2: the sound of treats

Bring two bowls and several treats. Have your dog sit in front of you and not move. Under his eyes, place yourself in the middle of the two bowls and gently drop a single candy in one of the bowls and three in the second bowl. Attention, every treat that falls must produce an audible sound by the dog. Then give permission to your dog to eat.

If he goes instinctively to the bowl where there is the most treats, it is that your ball of hair can count! Repeat the process several times and in a different order to make sure …

Test 3: the steak under the towel

This test seems extremely simple for a human past the nursery, but it is far from obvious for all animals. It tests what is called the “persistence of the object,” or how the animal imagines and constructs the world outside its field of vision.

It turns out that the dog is rather good at conceptualizing an object even when it disappears. This is not the case for the cat, who will tend to follow the hand once the reward is hidden.

This test also allows us to observe another parameter: it is the dog’s ability to take an interest in the human, and what we do. The dog must indeed have interest in what you are showing him. The second test goes further with this aspect.

Test 4: the steak under the cup after 30 seconds

This test adds memory to the exercise. The dog must observe the human drop the reward under one of the cups, and then he is out of the room for 30 seconds. On his return, we measure the speed at which he goes to the right cup.

The dog being attentive to our actions, and endowed with a good memory, it is generally quite fast. But you can watch less concentrated dogs go on something else on their return, or test the other goblets before finding the right one.

Naturally, if we hid the reward without showing it to the dog, we would not test his memory but his sense of smell and his ability to search!

Another variation is to move the cups under the look of the dog after hiding the reward. This tests again the persistence of the object, but at a higher level: that of being able to follow the object without seeing it, since it is hidden under the goblet. This requires a higher level of concentration, since it is necessary to keep in mind the position of the reward while following the movements of the cup.

READ
How To Train Your Dog To Come When You Call

Test 5: the towel on the head

This last game does not test the rational intelligence, but emotional: it allows to measure the reactivity and the emotivity of the dog!

This test resembles the “what the fluff challenge” because it measures the surprise in the dog. Be careful not to scare him! But an emotionally stable dog should not panic with this single test, so it can be an empirical way to measure his level of anxiety.