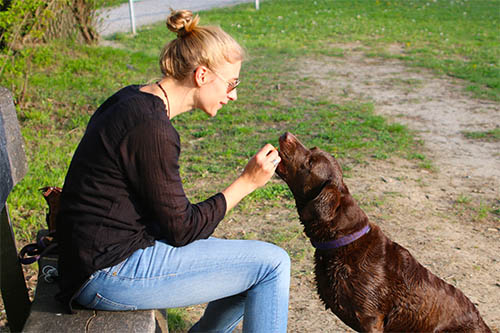 Rewarding your dog means reinforcing and congratulating an action that you want him to reproduce. The reward in education is essential and essential if we want to base the master / dog relationship on notions of cooperation and not of constraint.

Why reward rather than punish your dog?

Rewarding your dog rather than punishing it means reinforcing good behaviors and therefore pushing the dog to reproduce them to once again obtain satisfaction. Thus, rewarding him for his good deeds is a completely natural and effective way to communicate with him and obtain a balanced relationship over the long term.

Conversely, punishing a dog consists, in many cases, of adding something unpleasant to him so that he ends up avoiding such or such behavior. We therefore start with an education based on avoidance and fear: and this is clearly not a solution that respects the well-being of the animal.

However, a small aside: even when one chooses to educate his dog through positive methods, there are also punishments, but which will result more in the withdrawal of something pleasant for the dog in order to make him understand that he will not obtain satisfaction with such and such behavior.

Clearly, what must be remembered is that it will always be much more effective and benevolent to reinforce good behavior rather than punish bad ones.

Rewarding your dog therefore serves to:

What reward for your dog?

Rewarding your dog means setting up a positive association following a proposed action. However, it is important that this association is really positive for your animal.

Indeed, a reward may be one for a dog X but absolutely not for a dog Y. It is therefore necessary to learn to observe and decipher the signals that the dog sends following a reward.

For example, some dogs are completely uncomfortable with being petted. Thus, thinking to congratulate him by caressing him, we send him a contradictory message on the contrary. If we caress him for having returned to the foot, it may be that in the future, he does not come back with the same enthusiasm, for “fear” of being caressed.

In fact, if your dog yawns, licks his nose, turns his head or even growls, you know that the chosen reward is not suited to his desires and expectations.

But the caress is, fortunately, far from being the only reward to offer to your dog. Indeed, you can choose one of the following solutions:

How to reward your dog?

Finally, to properly reward your dog, you must not reward him “for free”, in which case the rewards will lose their value. It is therefore necessary to reward only the good behaviors that you want the dog to reproduce.

In addition, the timing of the reward will be very important! Indeed, the dog lives in the present moment, so it will not be a question of rewarding him one or 2 hours after the action carried out, because he will simply not understand why he is being rewarded and you will then have rewarded your dog. free.

Always in this logic of timing, it will be necessary to be precise in the reinforcement of the behavior and not, unconsciously, to reinforce the bad attitudes. This is often the mistake we make, especially when we teach a dog to sit, for example: we ask him to sit, we are happy when he does, but our enthusiasm makes us get up, even jump on us, and we continue to reward him all the same. Here, we don’t reward him for sitting down, we reward him for getting up and jumping on us.

What you must remember